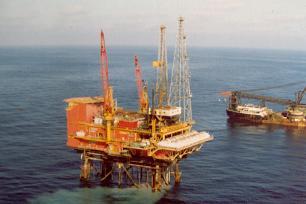 From 1974 to 1979 I worked on this project, initially as an Instrumentation Engineer, then in charge of Offshore Hookup and later became one of two Platform Superintendents during the completion of well drilling and startup of production. This was a major engineering project, and I have an extensive collection of photos taken during that time. I hope that you find this interesting, please feel free to use any material on this page. Some pictures are clickable for a larger image.

The Maui gas field lies 21 miles west of the North Island of New Zealand, off the Taranaki coast, in view of Mt Taranaki (or Mt Egmont). The field was drilled in 1969 and 1970 and assessed to hold 8,428,000 million cubic feet of gas and recoverable condensate (liquid) of 75 million barrels. It was one of the largest continous gas fields ever discovered. 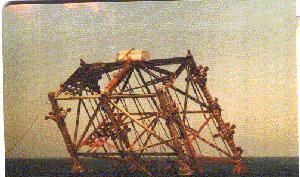 Construction started in 1974, and the steel jacket was built at Tsu, in Japan. The steel jacket was designed to be self floating, for towing to New Zealand, and was designed for 354 feet water depth and 75 ft storm wave. Other design conditions include earthquake and storm winds. Specialist welding and heat treating was required for steel thicknesses of several inches with all welds X-rayed. Two of the jacket legs contained flotation chambers which would be flooded in sequence during positioning at the Maui field. 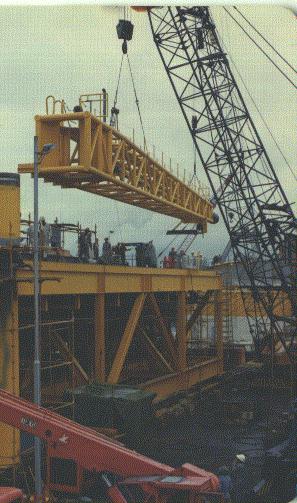 The flare boom is fitted. 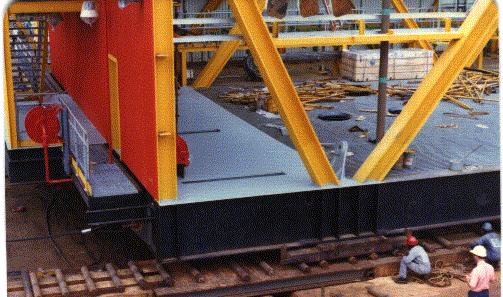 A module rolls out onto a sea-going barge. 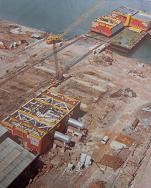 The modules containing living quarters and production facilities were built in Singapore, at Jurong and Sembawang shipyards, placed on barges and towed to New Zealand. 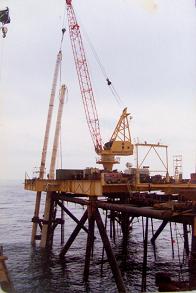 Once the steel jacket was located in position and settled on the seafloor, an extensive piling program began to firmly locate the structure against earthquakes and severe storm conditions. The 28 piles were made of 4 inch thick 48 inch diameter steel pipes, welded together and driven into the seabed using a steam hammer on a crane barge. 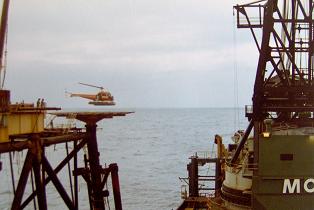 1200 miles of open ocean caused delays to the project as there were very few workable days when the sea was settled enough for piling work to continue. A helipad was attached to the jacket to allow crew changes when the crane barge could not lie alongside. The original crane barge Atlas supplied by Brown & Root was replaced by the Blue Whale, a 1200 ton lift crane mounted on a converted 47,000 ton bulk carrier and operated by Marine Offshore Contractors of Switzerland.

Once the jacket piling was completed,

(Picture from Tyler Andersen) the tank decks were welded in place followed by the modules. Each module weighed up to 600 tons. The three story living quarters for 60 persons (all men in those days) was fitted with a helideck on the top. After the living quarters was placed, 60 men were living in it 7 days later, with electricity, sewerage and other services functional. 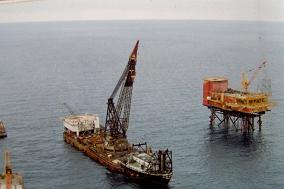 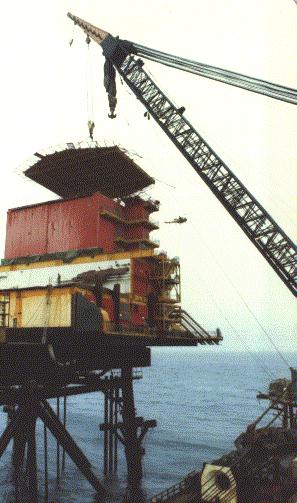 Offshore hookup of piping, process equipment and structural components continued during the drilling phase when 14 wells were drilled and cased, using directional drilling techniques to ensure full coverage of the large field 8,800 feet below. During this time, pipe laying barges laid the 24 inch gas line and 10 inch condensate line over the 21 miles of seabed to the onshore production plant. 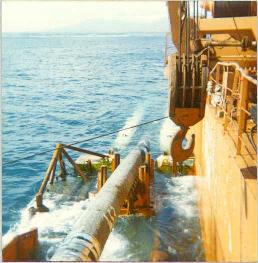 Many of the personnel working on the platform commuted daily by helicopter or lived on the Blue Whale as the platform accomodation was filled with drilling crews. 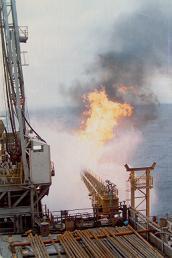 The first well was tested by flaring in June 1978 and later that year the gas and liquid pipelines were flushed out with gas from the production facilities. The platform moved into production as the remaining wells were drilled and completed, and the onshore production equipment was commissioned.

The processing equipment on the platform uses low temperature separators to initially separate gas and condensate to be sent ashore in the two pipelines. Onshore, the gas is dried further and the liquid processed to manufacture LPG and condensate suitable for conversion into petrol and other refinery products. A large percentage of the gas is used in the synthetic petrol plant in Taranaki. 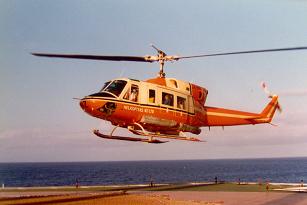 The Maui Platform A continues to produce gas and condensate, and the second Maui Platform B has been installed a further 10 miles offshore to extract gas, oil and condensate from the other major part of the field. Full production was expected to continue until about 2015 when the field's recoverable reserves will be mostly depleted, but the gas production was cut back in 2006.

Back to the Top